SAMARINDA, KOMPAS.com - Five people have been reported dead in a deteriorating situation over clashes of two ethnical groups in Tarakan, East Kalimantan. Police backed up by military personnel have been struggling to control the situation.

Police sources mentioned the death toll of clashes erupting on Sunday night increased as they went on last night up to this morning. "The latest clashes took 4 dead casualties from the two groups. So the number of casualties has reached five," said one of Tarakan Police Resort personnel who refused to mention his identity.   The widespread clashes marred by houses burning were triggered by the death of a leading tribesman named Abdullah (45), on Sunday night. Abdullah could not survive from stab wounds he got after trying to stop a brawl involving his child. Police arrested 3 suspects of the murder; Br (20), Aa (16), and Ln (20).

However, the mass supporting and showing concerns on the victim knew the arrest and went to a Tarakan Police station. They demanded police to hand the suspects over to them.  The action sparked the clashes between two ethnical groups supporting the victim and suspects.

Thousands of Tarakan residents began a mass evacuation on Wednesday to hinder themselves from clashes. They chose to settle at four evacuation points, among which is Tarakan Navy Base. 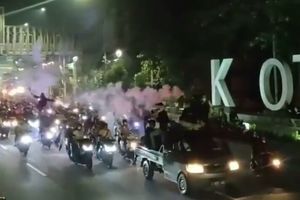